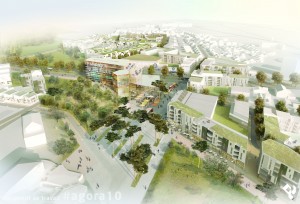 This is a state-run integrated development zone (ZAC) designed to serve as a new central hub for Carrières-sous-Poissy. It is a major project in the OIN Seine Aval operation for the downstream Seine area, led by the EPAMSA statutory development body in close partnership with the town of Carrières-sous-Poissy and the Communauté d’agglomération 2 Rives de Seine group of municipalities.

This new eco-district will meet ambitious environmental and energy objectives. For instance, all of the buildings will have to meet the minimum requirement of 60% of renewable energies for heating and hot water.

This integrated development zone has a variety of objectives:

The project to build a central hub for Carrières-sous-Poissy will eventually develop the following:

The Nouvelle Centralité operation was designed to blend gracefully into its urban and natural environment. This integration relies on preserving and enhancing biodiversity and the living environment through a landscape design that maximises the site’s plant biodiversity (horizontal and vertical structuring) and animal biodiversity (the entomofauna in particular) by, as far as possible, recreating habitats that are built to last and ready to provide a home for fauna and flora. Preserving ordinary and extraordinary biodiversity on the site entails identifying a north/south ecological corridor. This creates a continuity between the Coeur vert project in the Chanteloup loop and the Seine, via the Parc du Peuple de l’herbe project, enabling species to move around and giving the population a quality recreational area. The proposed ecological channel on the land set aside for the A104 motorway helps develop the ecosystem. And the ecosystem, in turn, plays an active role in the alternative rainwater treatment system by acting as a biological water purifier (the presence of the ecosystem speeds up the decomposition of organic matter). The concept of “nature in the city” proves its worth. Water-related questions have a hand in developing and dispersing the site’s biodiversity, while at the same time improving the living environment. The ecological network approach is aided here by the creation of paths and continuities that connect up all of the nature areas present on the site.