You are here: Home > A standard-setting eco-district 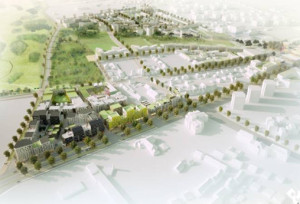 This eco-district is being built for two reasons: to protect biodiversity in the many natural areas surrounding Carrières-sous-Poissy, and to encourage eco-construction, whose industry flagship and promotional centre is Fabrique 21 (www.fabrique21.fr).

Work has begun on the public spaces, namely the future Beauregard,

Pissefontaine and park districts. Work on building the new roads will unfold to late 2013.

In late May, EPAMSA launched a competition to develop the future 10.5ha ZAC Centralité “ecological corridor”. This park, which connects up with the designated “sensitive natural area” (ENS), serves two main purposes: as an urban park catering for modern-day urban functions, and as an ecological corridor linking the major natural areas to its north and south. The winner will be announced by the jury in late November.