On 17th January, as part of the international Wetlands agreement, water birds were counted by volunteers from the Ligue pour la Protection des Oiseaux (LPO – Bird Protection League) and the 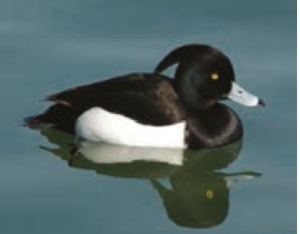 Amongst others, great crested grebes and some rarer tufted ducks (cf. photo opposite) and gadwalls have found the area welcoming and set up home there, to the delight of children, walking enthusiasts and bird watchers alike.