You are here: Home > Live from the park…

On the occasion of the World Wetlands Day, the Ornithological Centre of Île-de-France has allowed four classes from the city of Poissy to discover waterbirds at the Parc du Peuple de L’herbe this past 2nd February. Using binoculars and a telescope, the children learned how to observe birds in the Galiotte pond. This allowed them to understand the need to preserve wetlands in order to maintain a rich biodiversity.

Two troughs built by students from the IME Notre Ecole de Carrières-sous-Poissy, Raphaël and Quentin, were installed on 6 February 2017 in order to collect data on bird feeding behaviour during winter. The park’s visitors had the opportunity to participate in the scientific experience by connecting to BIRDLAB, a free app: the visitors collected precious information which were analysed by researchers from the National Museum of Natural History, while learning how to identify the various birds species. 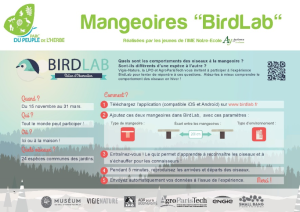 The 8th edition of the 12km nature race took place in the Parc du Peuple de L’herbe on 12 March 2017. The race, organised by associations FLEP, Libre Aventure and Carrières Athlé, with support from the Département, the urban community Grand Paris Seine & Oise and the Île-de-France region, was resumed at its preferred field, which had been inaccessible during the renovation works at the park. Four hundred and ninety athletes set out from the Complexe sportif Bretagne, with many spectators present to cheer on the sports men and women.
The director of the Parc du Peuple de L’herbe presented prizes towards noon in this lively setting. 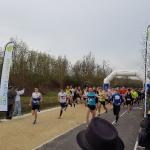 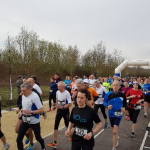 From 27 to 30 March, the sports service of the city of Carrières-sous-Poissy organised its primary schools cross country event around the Vieille Ferme pond. Over 1300 lower primary pupils competed on various tracks. The young athletes and the teachers really enjoyed participating in this sporting challenge, watched by parents who had come to cheer them on.

On 25 March 2017, Lions Club International organised an “Environment Day Challenge” in collaboration with the Département and the urban community Grand Paris Seine & Oise, in order to transmit a “Clean Earth” to future generations. To this effect, many volunteers came to participate in this cleaning day. 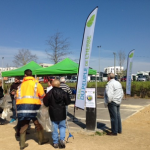 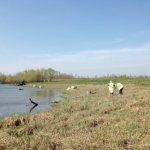 The Département des Yvelines promotes more nature in the city, in terms of enhancing quality life and social links. It operates the quality of life label “Villes et Villages Fleuris” (VFF) and organises the annual competition which includes trophies and special prizes.
To this effect, in 2017 it is conducting an awareness cycle on Urban Ecology and Nature in the City and is offering 6 free “Décou’Verte in the Yvelines” visits for elected officials and technicians from the communes to discover “original and innovative landscape creations” in the Yvelines supported by the communes and inter-communal entities, as well as the Département within its Sensitive Natural Areas.

Within this framework, a visit dedicated to the discovery of the Sensitive Natural Area of the Parc du Peuple de L’herbe in Carrières-sous-Poissy took place on 20 April 2017 in the presence of Marie-Hélène Aubert, Vice-Chairwoman of the Conseil Départemental, President of the “Villes et Villages Fleuris” jury, Joséphine Kollmannsberger, Vice-Chairwoman in charge of environment, culture and tourism, and Odile Elodie Sornay, Councillor of the Département.

Around thirty elected officials and technicians took in the renovations drawing on descriptions from TER agency, the designer of the park and agents of the Département.