Proposed construction of an urban port at Triel-sur-Seine 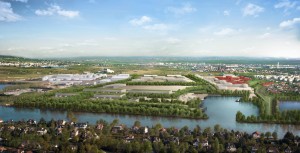 The project site is situated in the southern sector of the Triel-sur-Seine municipality, straddling the northern border of the Carrières-sous-Poissy municipality. It is directly connected to the proposed Peuple de l’herbe park to the south and the proposed ZAC Ecopôle integrated development zone to the west.

The project covers approximately 34ha, consisting of around 24ha of plots of land and 10ha of existing docks, divided between the municipalities of Triel-sur-Seine and Carrières-sous-Poissy.

The project site is currently occupied by the aggregate mining operations run by GSM and LGSN. These companies will remove their facilities, but continue to run aggregate processing and river transport operations on the future port site.

The port development work will take place between 2015 and 2030 in two phases, during which the entire dock and its banks, as well as 17ha of land (Phase 1) then the remaining 7ha of land (Phase 2) will be completely redeveloped.

The aim of this new public port infrastructure is to expand the range of ports available in the downstream Seine area and add to the existing network to the west of Paris.

It will give the Chanteloup loop a local river-transport service for both existing businesses in the vicinity and future businesses drawn to a region that is undergoing a complete transformation.

In connection with the CA2RS’s economic development project, the port may run a river transport service to the ZAC de l’Ecopôle, a future eco-construction cluster.

transit through the future port.

The port transit facilities will consist of four loading/unloading jetties, each around 20 metres wide. From 2016 onwards, one of these jetties will be assigned to a 1ha shared-use earth platform located outside the port.

The first plots of land to be put on the market on the port will be available in 2018.

The development proposals have made a priority of ensuring that the future port blends into its landscape and environment. The project provides for maintaining flood plains within the port, using careful planimetry and the creation of a large river arm on the port’s western edge. This landscaping measure will be part of the Seine river corridor and will ensure greater ecological continuity in the wetlands. Similarly, the ecological redevelopment of all of the dock banks will improve the condition of water-related natural environments.

At the same time, landscaping around roads and plots of land will create a backbone of planted areas that will structure the whole project and aim to blend it into its surroundings. They will help establish urban continuities and transitions to and between the various development projects in the vicinity, and will be accessible to pedestrians and cyclists.

Lastly, the redevelopment of the current dock entry and its complete redesign will aim to significantly reduce the impact of boat manoeuvres as they enter and leave the dock.