You are here: Home > Developments at the Parc du Peuple de l’Herbe

During winter 2014 and spring 2015, the first trees and small shrubs were planted by the departmental council, in the active strip transition area (only native species are planted to foster biodiversity). Over 106 tall trees and shrubs have been planted, over 1,700 small shrubs and over 170 young forest plants will grow over the coming seasons.

Trees and shrubs have also been planted in other areas (picnic area, pond area, copse area and events area), shaping the park’s landscape.

The first pieces of furniture have been installed on Rue de la Reine Blanche. Work on the active strip transition area along Rue du Docteur Touboul and Rue de Beauregard is still underway to create the pedestrian path, cycle path and car park.

Two rafts have been put on the La Galiotte lake. One of them encourages the nesting of common terns. The other raft is covered in vegetation to provide a haven for migration birds, giving them a place to rest and increasing spawning and nursery areas for fish. On the west bank of the lake, a fishing deck has been made and over 28,000 aquatic plants enhance the surroundings.

The earthworks on the north and west banks have been completed.  Aquatic species will be planted there from April onwards.

The earthworks on the alluvial beach and ponds have also been completed.

Work on the wetland areas will continue with various species being planted from April onwards. The earthworks have resulted in gentler slopes on the La Galiotte lake and the Seine, thereby fostering the plantation and development of aquatic vegetation that is richer in biodiversity. 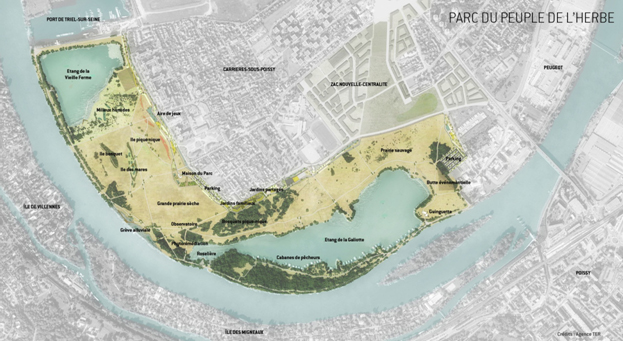