You are here: Home > Park ‘s Ecological and Landscape Projects to Finish Soon.

New to the Vieille Ferme’s Pond 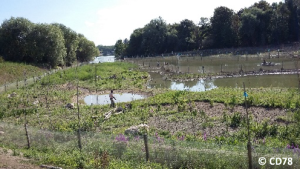 The finishing touches are underway in the area officially classified as a natural zone of ecological interest for fauna and flora (ZNIEFF). The central part of the Park will be finalized at the beginning of October after installing the outdoor furniture and pedestrianizing the construction-site roadways, which will offer pleasant walks within the site.

Work on the Vieille Ferme pond’s zone started again in September as the water level slowly descended. Work on the west bank’s pontoon is coming to a close while the south bank’s pontoon has begun. Aquatic planting on latter has also taken off. Two tern rafts, which create small, artificial islands for birds, have been set-up in the middle of the pond. 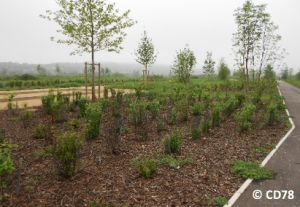 At the same time, a new planting campaign of vegetables, trees, and bushes will begin in early October and continue through December. Into this green lung of the Seine Valley will come hundreds of new varieties to complete the present plantings.

Falcons on the Lookout! 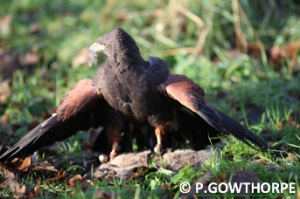 To limit the park’s large rabbit population and the damage incurred by their proliferation, falconers have been solicited. These specialists practice the art of capturing rabbits in natural habitats with the help of their trained raptors.
If you happen to look up during your walk through the site, you might just catch this hunt by flight, which began in September and will last until next February.

Le Parc du Peuple de l’Herbe, a natural space situated in a flood plain, perfectly played its role of a flood storage area when it was inundated this past May and June. The river reached 22 meters (about 72 feet) at the flood’s peak, the water level rising about 4 meters (about 13 feet). The Seine thus flowed over the towpath at several places: the Galiotte and Vieille Ferme ponds also experienced a significant water-level rise.

Ultimately, the damage incurred was minimal. The Seine swept up a significant amount of garbage, which was collected along with the silt that covered the aquatic plants seeded since last summer. The youngest plants didn’t survive the silting and were replaced in August. The alluvial bank quickly recovered its initial appearance.

Labeled as a Sensitive Natural Space, le Parc du Peuple de l’Herbe will now integrate differentiated green-space management for the entire site, covering 113 hectares (279 acres). This will allow for a more environmentally-respectful method for green space maintenance. The intensity will be proportional to usage and ecological situations while taking into account both landscaping and public appreciation objectives. This is why the park’s operational zone requires the most careful maintenance especially with mowing flower meadows and weeding…

Since July 2015, the wooded picnic area and the southeastern part of the park, located at La Gaillote’s parking lot, have been overseen by the urban community, Grand Paris Seine & Oise (GPS&O), a group progressively taking over the park’s management. Grass mowing, scything of paths and rain gardens, weeding, and removing guards from planted trees help both to beautify the designated areas and better welcome visitors.

A late annual scything of the central meadow is scheduled for October, which will benefit the presence of the Small-Flowered Buttercup (Ranunculus parviflorus), a protected species in the park.