Making the living environment more attractive by protecting and developing natural areas is one of the Département’s top priorities, especially in the Seine valley.

Around 100 hectares of land formerly used for farming and aggregate mining in the south of the Chanteloup loop currently cut the town of Carrières-sous-Poissy off from the Seine. This large area, which has been classified as a type-2 ZNIEFF (or natural area of ecological, faunistic or floristic interest), includes Ballastières and the farming area of Carrières-sous-Poissy. It is largely undeveloped, tends to be unused and is gradually becoming covered over with vegetation. 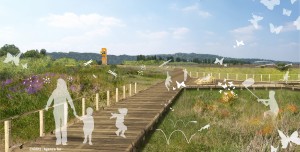 For the Conseil départemental and the CA2RS, the best way to ensure that this large open area remained clear and available on a long-term basis and at an affordable cost was to turn it into a vast park, with some minor developments and tailored management.

The future park will play a key role. Because of its location, its geometry and its very nature, this vast, open natural area on the banks of the Seine is at the centre of relations between an urban site and the river. The site is not seen as an isolated area: it stretches up from the river like a beach and is also an edge sloping down from the existing districts and the future new centre of Carrières-sous-Poissy.

The planned park revolves around:

Based on these principles, the park’s facilities have been designed in three broad families that form the gradual transition between the town and nature.